Want signed copies of my books? Call my hometown bookstore, The Book Bin at (503) 361-1235, and place an order for an autographed copy! 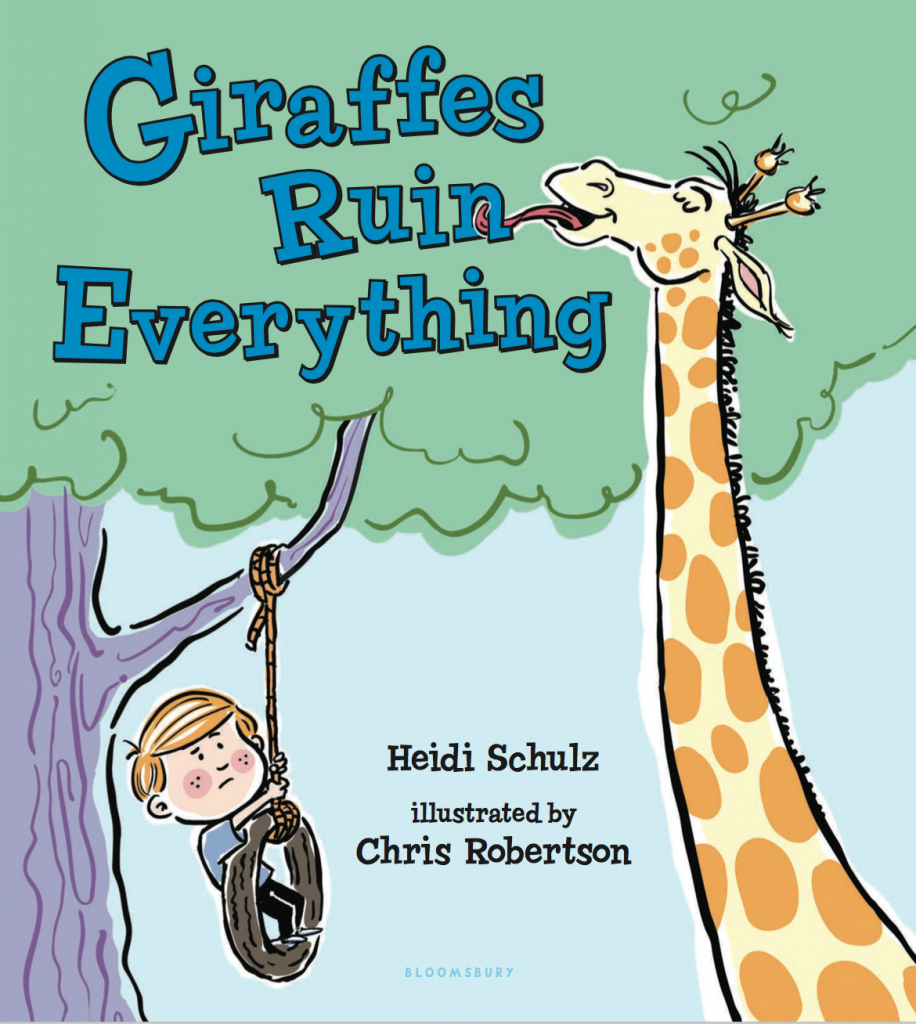 It seems that giraffes will misbehave whether attending a birthday party, going to the movies, playing in the park, or just about anything else.

“Giraffes really do ruin everything. … Bright digital illustrations enliven this cheeky tale. A young child learns to navigate the nuances of social relationships, with help from a spotted, lanky friend.”—Kirkus

“In an age where hurling accusations about someone else’s shortcomings has become something of a social norm, this is a gentle but firm reminder that patience and understanding have their rewards.”—Publisher’s Weekly

“What starts off as a story about how awful being friends with a giraffe can be turns into a heartwarming lesson of learning to understand and accept friends as they are.”—School Library Journal

Oregon Reads Aloud: A Collection of 25 Children’s Stories by Oregon Authors and Illustrators

Look for my story The Day the Puddles Stomped Back inside! 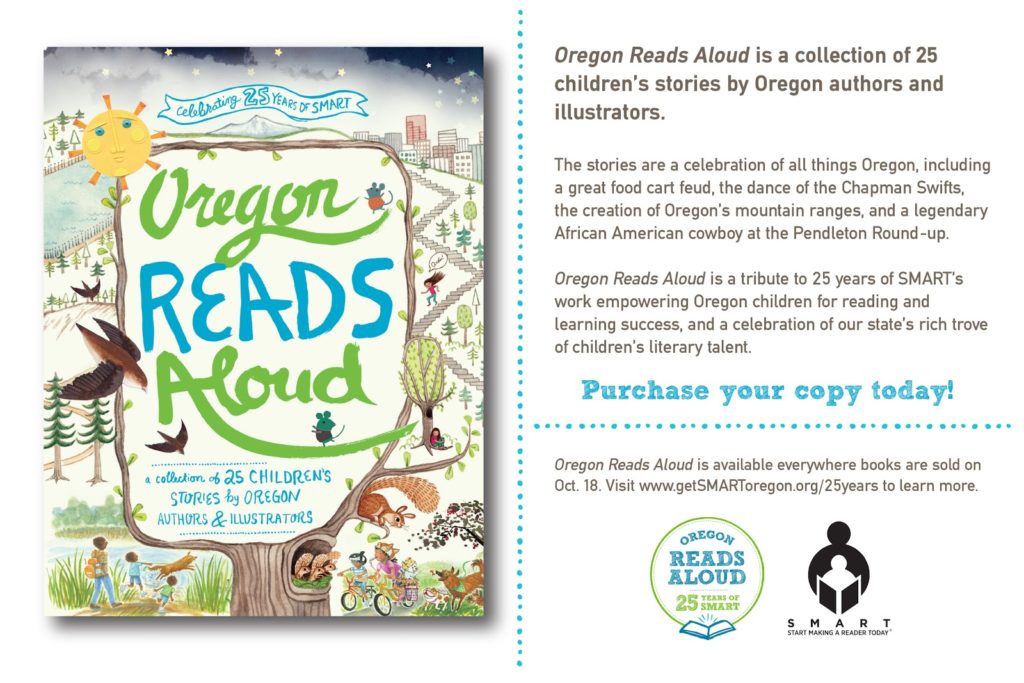 Oregon Reads Aloud is a collection of twenty-five read-aloud stories for children, written and illustrated by Oregon authors and illustrators.

The twenty-five stories in Oregon Reads Aloud are a celebration of all things Oregon, including a great food cart feud, the dance of the Chapman Swifts, the creation of Oregon’s mountain ranges, and a legendary African American cowboy at the Pendleton Round-up.

The book is a tribute to twenty-five years of SMART’s (Start Making a Reader Today) work empowering Oregon children for reading and learning success. Oregon Reads Aloud proudly features the state’s rich trove of talent within the children’s literary community.

Twelve-year-old Jocelyn dreams of becoming every bit as daring as her infamous father, Captain James Hook. Her grandfather, on the other hand, intends to see her starched and pressed into a fine society lady. When she’s sent to Miss Eliza Crumb-Biddlecomb’s Finishing School for Young Ladies, Jocelyn’s hopes of following in her father’s fearsome footsteps are lost in a heap of dance lessons, white gloves, and way too much pink.

So when Jocelyn receives a letter from her father challenging her to avenge his untimely demise at the jaws of the Neverland crocodile, she doesn’t hesitate-here at last is the adventure she has been waiting for. But Jocelyn finds that being a pirate is a bit more difficult than she’d bargained for. As if attempting to defeat the Neverland’s most fearsome beast isn’t enough to deal with, she’s tasked with captaining a crew of woefully untrained pirates, outwitting cannibals wild for English cuisine, and rescuing her best friend from a certain pack of lost children, not to mention that pesky Peter Pan who keeps barging in uninvited.

The crocodile’s clock is always ticking in Heidi Schulz’s debut novel, a story told by an irascible narrator who is both dazzlingly witty and sharp as a sword. Will Jocelyn find the courage to beat the incessant monster before time runs out?

★ “The real charm here is in the unnamed narrator, whose arch and clever diction and open disdain for children make him the perfect purveyor of Jocelyn’s story . . . Readers will delight both the story and the storytelling.” — BCCB, starred review 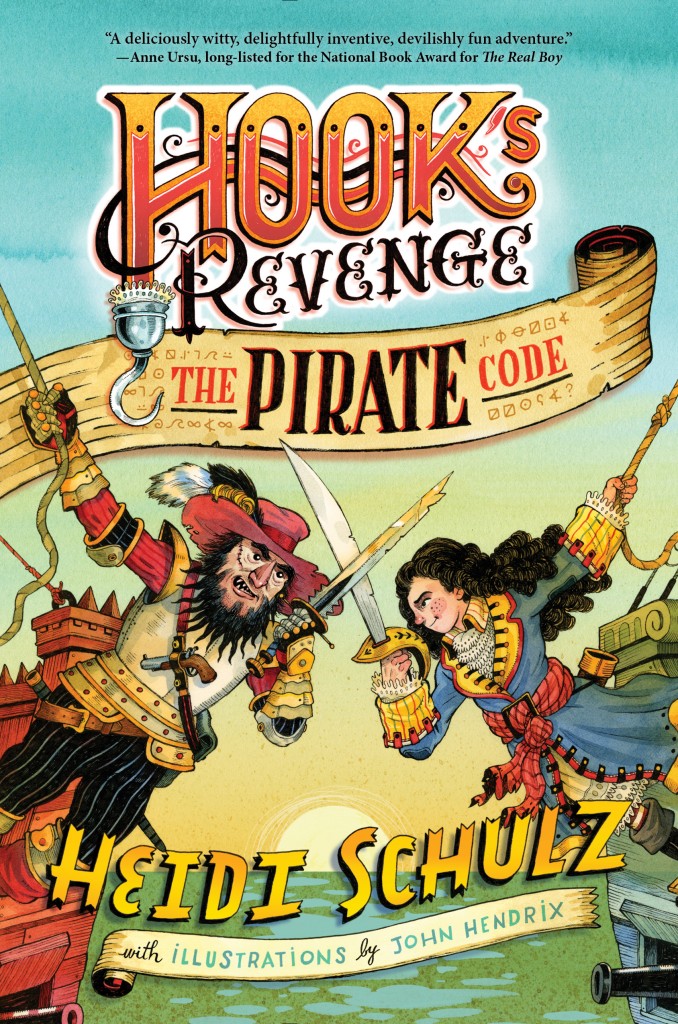 Fresh off a fearsome encounter with the Neverland crocodile, Jocelyn Hook decides the most practical plan is to hunt down her father’s famous fortune. After all, she’ll need the gold to fund her adventuring in the future. (And luckily, Hook left her the map.)

But the map proves to be a bit harder to crack than Jocelyn had hoped, and she’s convinced that the horrible Peter Pan might be the only one with the answers. Of course, he doesn’t really feel like helping her, so Jocelyn takes the only reasonable course of action left to her: she kidnaps his mother. Evie, though, is absolutely thrilled to be taken prisoner, so Jocelyn’s daring ploy doesn’t have quite the effect she’d planned for.

Along with the problem of her all-too-willing captive, Jocelyn must also contend with Captain Kruger, whose general policy is that no deed is too dastardly when it comes to stealing Hook’s treasure. And with the ever-shifting Whens of the Neverland working against her as well, Jocelyn, Evie, Roger, and the rest of the Hook’s Revenge crew have their work cut out for them.

In this rambunctious showdown between characters new and old, Jocelyn puts her own brand of pirating to the test in a quest to save her future and those she loves.

“Fans of Barrie will appreciate the development Neverland; the paradoxes of adults living in a place where one never grows up are given an intriguing explanation. On the other hand, those who are only interested in a rollicking adventure with a feisty heroine, cinematic action, and the cleverness of children pitted against nasty adults will also find exactly what they came for.” —The Bulletin of the Center for Children’s Books (BCCB)

“With a salty and sardonic narrator and chuckle-worthy dialogue, this sequel can be enjoyed as a stand-alone.” —School Library Journal

“Whether it’s pixie dust or just magical storytelling, this sequel manages to soar even higher than its predecessor. The Pirate Code takes the quirky cast of Hook’s Revenge, throws them into a rollicking new adventure, and adds some nail-biting drama to the mix with an ingenious mid-book plot twist. Heidi Schulz’s take on Neverland is just as fun, bold, and surprising as her young hero Jocelyn Hook—who should fast become a favorite of boys and girls alike.” —Christopher Healy, acclaimed author of The Hero’s Guide series

“Here’s a book that’s funny and ferocious; an adventure with a heart of gold buried deep in its chest, told by one of the great unreliable narrators—unreliable in the sense that you wouldn’t want to ask him to watch your bike.” —Adam Rex, New York Times Best-selling author and illustrator of Frankenstein Makes a Sandwich

“Full of heart, humor, and wild imagination, Hook’s Revenge: The Pirate Code returns us to the world of the Neverland and the indomitable Jocelyn Hook–and not a moment too soon. Heidi Schulz explores the power of friendship, family, and sacrifice with sensitivity and sparkling wit. This book will make you believe in magic.” —Claire Legrand, acclaimed author of The Cavendish Home for Boys and Girls

Be in the know about Heidi Schulz’s new releases, events, and book news. Win prizes. Be fabulous.
Click to Subscribe to Heidi’s newsletter.
Emails limited to one per month at most.